Is Snacking Synonymous with Junk food?

“Nothing interferes with the change process more than unrealistic, unachievable goals.”

According to Wellcoaches, the most well respected health coaching organization in the world, “Nothing interferes with the change process more than unrealistic, unachievable goals.” Unfortunately, for many guests who leave H3, especially after their first visit, that is exactly what they have. I am reminded of a very busy business man for example, who came to H3 about a year ago.  Prior to attending the program, John was totally sedentary, blaming lack of time as his primary reason for not exercising. He participated in the JumpStart program for 2 weeks, and did more exercise in those 2 weeks that he had in previous 2 years.  While he left a little sore, he also left with great enthusiasm because progress he had made. He saw and felt the benefits of his efforts and promised himself he would continue to exercise at home. For a while he was able to, but ultimately, as it had so many time before, his busy work and family schedules began intrude, exercise first became inconsistent  and then as it had so often in the past, completely stopped.

He returned to H3 recently and shared with me his frustration of what he felt was another failed attempt to get his health act together, and wondered if he ever would. During our conversation it came out that when he got home, his goal was to exercise an hour in the morning and then another one when he got home from work at night. That’s right his plan was to exercise 2 hours a day, remember, that before coming to H3 the first time, he wasn’t exercising at all. When I asked why he thought he could continue to exercise 2 hours a day at home, he told me that he had been doing 4 hours here and by comparison he thought 2 would be easy.  But as work and family commitments began to pile up, 2 hours a day simple wasn’t possible. To make matters worse, as an all or nothing thinker, when it became obvious that he couldn’t meet his goal of 2 hours a day, he didn’t adjust to a more realistic ½ hour or an hour, he just stopped. 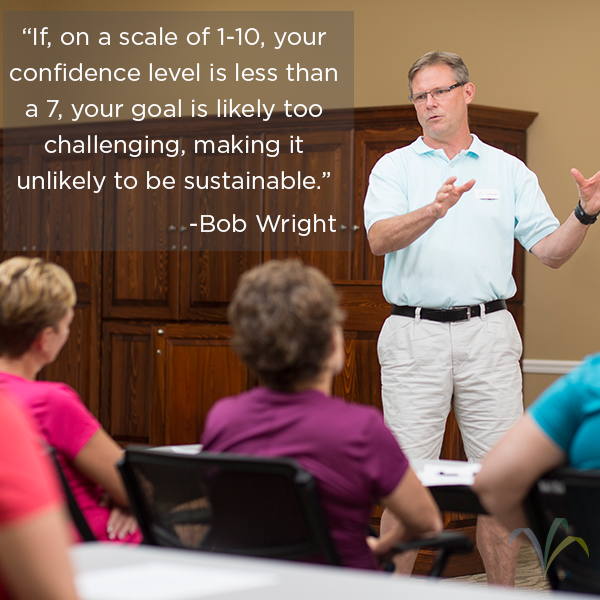 John and I met towards the end of his stay and I shared with him a goal setting strategy from the Wellcoaches manual. It is called a Confidence Scale. I asked John to tell me what his exercise goal was going to be this time when he went home. He said this around he was planning on walking briskly for 45 minutes a day, 4 days a week , and working with a trainer for 1/2 hr. 2 days a week.   I then asked him, on a scale of 1-10, (1 being no possibility of achieving the goal and 10 absolute success) how confident was he that he could actually achieve those goals. I was encouraged when he said a solid 8. With a confidence level less than 7, the goal is likely too challenging, making it unlikely to be sustainable.

Having  well designed, realistic goals does not guarantee success, but  they make it far more likely.