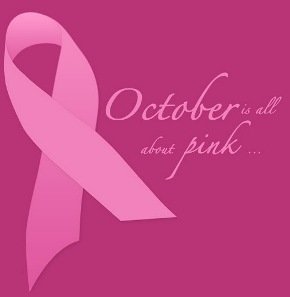 October is National Breast Cancer Awareness Month.   According to the American Cancer Society, breast cancer is the most common cancer among women in the United States.   By the end of 2013, an estimated 232,340 women (and 2200 men) will be diagnosed with invasive breast cancer and nearly 40,000 will die from it.  The good news is that in the last 20 years much progress has been made.  In fact since 1990, breast cancer death rates are down by 34%, and there are now nearly 3 million breast cancer survivors in the United States.  Survivors are living longer and healthier lives than ever before.

Unfortunately so much more can be and must be done.  There is reason to be optimistic; the advancement of treatment for breast cancer has improved.  We have a better understanding about what the risk factors are and what can be done to prevent it.  There is a persistent belief about cancer in general and particularly that breast cancer is caused by genetics or just plain bad luck.  While both certainly play roles, much else can be done to reduce the risk.  One organization leading the way in cancer prevention is the American Institute of Cancer Research (AICR).  They focus primarily on the nutrition, weight and fitness relationship to cancer prevention.  The AICR estimates that 38% of all breast cancer cases in the US could be prevented.   86,000 women every year could be spared having to face breast cancer. The chart below lists major breast cancer risk factors; note that several items can be controlled by us.

The evidence continues to mount, just this month, researchers from the American Cancer Society found that walking 7 hours a week is associated with a 14% lower risk of developing breast cancer after menopause.   Another study published in the American Journal of Clinical Nutrition found that a diet high in fruits vegetable and other plant foods not only help you stay at a healthy weight, but may directly reduce breast cancer risk as well.