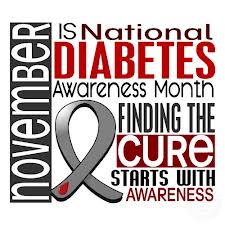 November is American Diabetes Month, sponsored by the American Diabetes Association (ADA); the goal is to raise awareness about this ever growing epidemic and its consequences. The prevalence of diabetes has doubled in the last 20 years (not so coincidentally the rates of obesity have double during the same time period) and most alarmingly are the developing diabetes cases in younger ages.  In fact, it is now estimated that 30% of children and teenagers who are being diagnosed with diabetes have type 2. Until recently Type 2 diabetes, formerly referred to as adult onset diabetes was unheard of in children and teenagers.

According to the ADA nearly 26 million children and adults in the United States have diabetes.  79 million Americans have prediabetes, putting them at a significant risk of developing type 2 diabetes.  Prediabetes is a condition where blood glucose levels higher than normal but not yet diabetes.  Recent estimates suggest that as many as one in three American adults will have diabetes by 2050.  Diabetes is a costly disease, in fact one out of every five health care dollars are spent caring for people with diabetes.

The consequences of poorly controlled diabetes are severe:

For those with diabetes, proper care and management can significantly reduce the risk of developing the above mentioned complications.  Talk to your doctor or certified diabetes educator to make sure you are doing everything you can to manage your diabetes.  If don’t already have diabetes, you have a great chance of prevention.  According to Walter Willett M.D., 92% of the cases of type 2 diabetes could be avoided by diet and exercise.  Even those who are at the greatest risk of developing diabetes because they currently are prediabetic can dramatically lower their risk.   Walking 30 minutes a day 5 days a week, eating a healthy plant based diet and modest weight loss can help in prevention.