How to Progress into a Pull-Up

Wes had never considered taking a weight loss vacation…that is until his wife Bee suggested he escape to Hilton Head Health for a week in May of 2014. Wes was “fed up.” “I was disgusted with how much I weighed. I had always been an athlete, but for the last nine years I let everything else get in the way of exercise,” said Wes, a lawyer from Alabama. He cherished his wife and daughter, but knew that his health was stopping him from getting the most from their relationships.

So, Bee called and set the two of them up for a one-week retreat at H3. “I never expected it would have such an impact on me,” commented Wes. Admittedly, he was nervous at first. “What would I be eating? Will I be able to do all the exercise? I’m so glad that Bee joined me, without her support I wouldn’t have gone in the first place.” Wes met with Director of Education, Bob Wright, on the morning of his first day to review his health assessment. “I was 40 pounds overweight, but Bob emphasized that this shouldn’t be about a number. He convinced me it was about a ‘lifestyle change’,” said Wes. Throughout the week Wes attended as many sessions as possible. “I could feel my mind changing gears. I started thinking – I’m going to be an athlete again.”

To Wes, two things he said stuck out the most: the ‘Unwise, Better, Best’ mantra that he learned in a restaurant guide class and a metabolism test that he had scheduled with Bob. “All the other diets I had tried were extreme. The Unwise/Better/Best principle simplified the process.” Wes would go on to make smarter choices back at home and when faced with several food options he’d pick the ‘Best’ possible choice. “I find myself reverting back to that mantra on a daily basis.” The metabolism test, a scientific way of analyzing caloric expenditure, helped him realize that he was drinking far to many calories. “It was a wake-up call. During my consultation I learned that I was drinking over 1400 calories of sweet tea each day.” Wes hasn’t had a sweet tea since, and avoids sugar as much as possible. “As I removed sugar, other things started tasting better. Strawberries never tasted so good!” 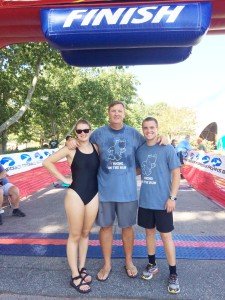 Wes felt rejuvenated. He had a newfound commitment, a plan for success and a supportive atmosphere at home. “Having a wife committed to fitness and daughter that plays a collegiate sport has been important. They’ve been so helpful. And I am very thankful for them.” In less than 6 months Wes has lost a total of 55 lbs. He completed the 30-kilometer bicycling leg of a team triathlon with his daughter and her boyfriend. (pictured above)

But, “I don’t want to make everything sound easy. It really isn’t.” says Wes. “A friend told me early on when I started a run/walk program, ‘just put one foot in front of the other’. I would hope that when people read about my story they see someone like themselves who simply decided he had enough and was going to do something about it. Inspiration comes from within. I guess what I’m getting at is that H3 makes me feel like part of a team that is invested in my success. My wish would be for folks to see themselves in my story and realize that you can accomplish your goals with some effort on your part and some support from others.”